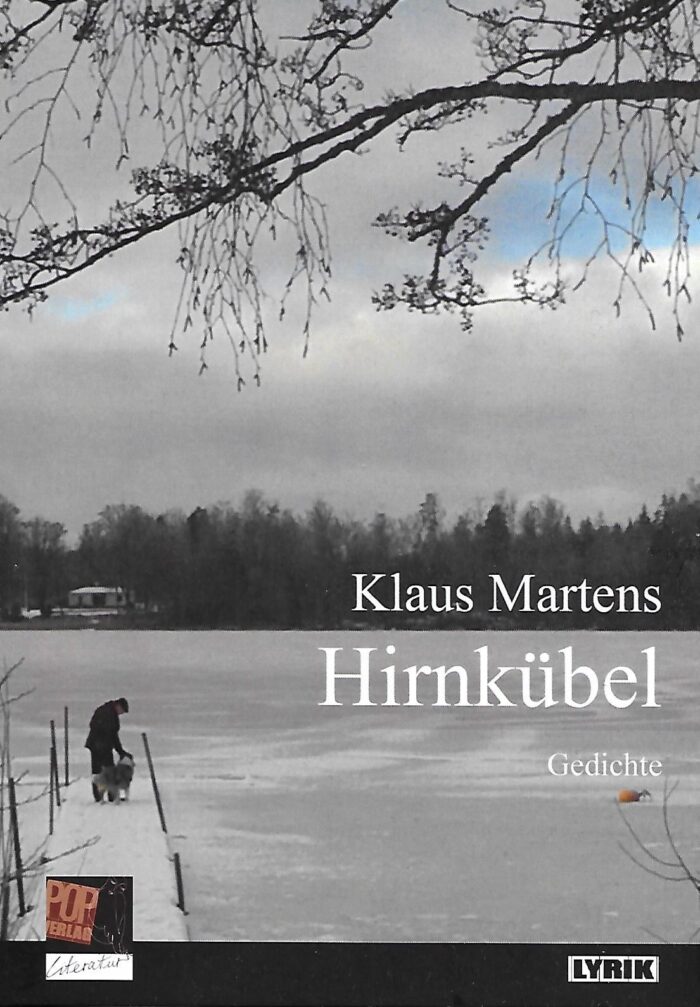 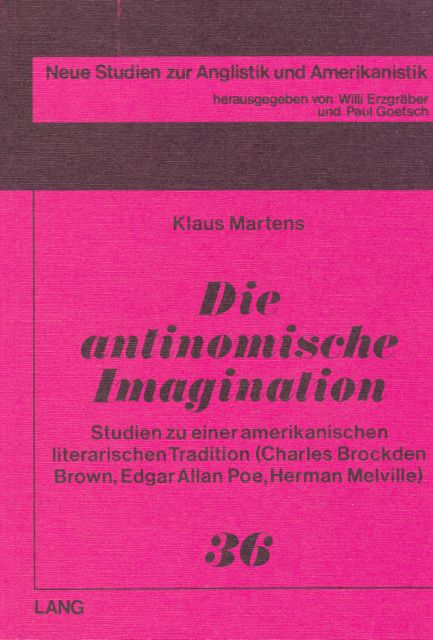 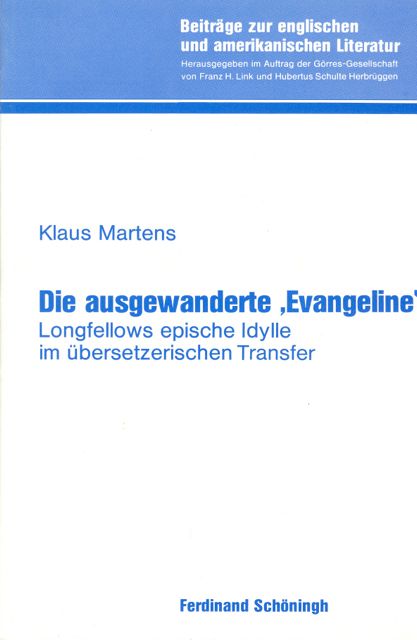 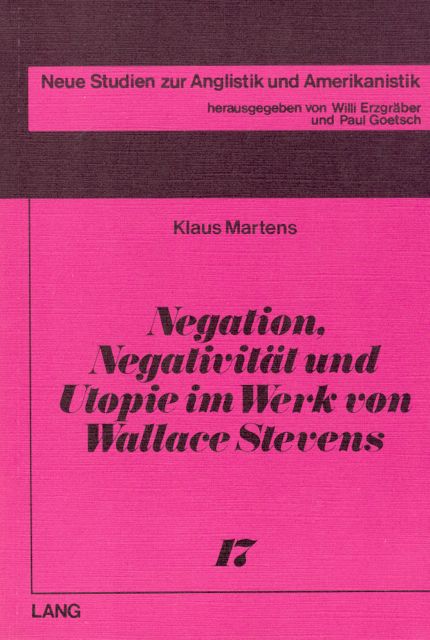 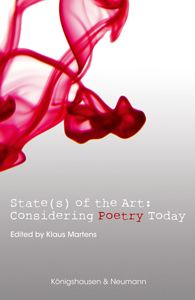 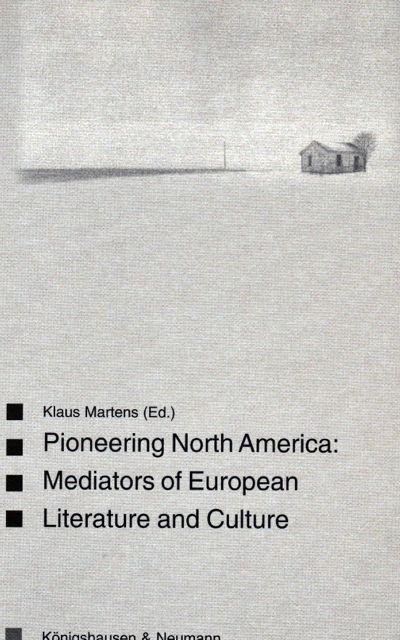 The present volume contains papers presented, in somewhat different form, at the University of Saarbrücken's international conference "Pioneering North America: Mediators of European Literature" (April 24-26, 1998) on interrelated aspects of the mediation of European literature in North America and of some of the authors, institutions, media, and other agents involved in it. The emphasis is on case studies, divided into four different thematic categories. Part One contains different approaches to Felix Paul Greve / Frederick Philip Grove and the crucial role of the Baroness Else von Freytag-Loringhoven. Part Two concentrates on seven other "Mediators of Culture," from Djuna Barnes to Paul Auster. Part Three, entitled "The Other and the New," presents a broad spectrum, from the impact of Derrida on American literary criticism to an analysis of the transformation of foreign patterns, themes and signs according to the needs of different cultural contexts. Part Four closes the collection with a number of fascinating insights regarding questions of mediation in "Literature and the Other Arts." Since much of America's modernist and postmodernist international cultural and literary impact has its origins in the diversity of European literatures and cultures, the convener of the conference and present editor feels that the time has come to rediscover and reexamine those influences and to see what has happened to some European cultural "goods" in their transatlantic transfer and, often enough, in their return home in different guises.

Der Herausgeber Klaus Martens, Professor of English & American Studies at the Universität des Saarlandes, is the author of several scholarly books, among them studies of Wallace Stevens (1980), the American Novel (1986), Longfellow Translations (1989), Frederick Philip Grove (1997) and, most recently, the editor (with Jutta Ernst) of the F.P. Greve-André Gide correspondence (1999). He is also a widely published poet and translator. 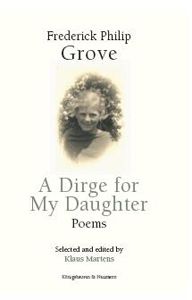 Frederick Philip Grove aka Felix Paul Greve (1879-1948) was a well-known Canadian novelist and essayist of international reputation with a previous career as a prolific German translator and novelist. In 1927 – during the creative years which spawned such classics as Over Prairie Trails, Settlers of the Marsh, A Search for America, and Our Daily Bread – Grove’s beloved daughter Phyllis May died of a ruptured appendix at the age of not yet twelve years. This tragedy prompted the composition of the poems selected from the manuscripts and edited for this volume. The poems and the occasional accompanying commentaries by the author afford rare and touching insights into Grove’s fascinating personality often thought remote and inaccessible. Many of the poems, photos and facsimiles contained in the present volume have never been published before in the present or any other form. An introductory essay and notes by Klaus Martens, the editor, discuss the texts and their contexts. Klaus Martens (*1944), the author or editor of many scholarly and literary books and essays, is a professor of English and North American literature and teaches at the Universität des Saarlandes, Saarbrücken, Germany. Four of his books deal with the life and work of F.P. Grove aka Felix Paul Greve, among them the much acclaimed Translated Lives: F.P. Grove in Canada and Europe (2001). A new book, Over Canadian Trails: F. P. Grove in Selected Letters and Documents, is forthcoming. Martens has also published several books of poetry and his poems have appeared in magazines and anthologies. His latest volume, Die Fähre. Ein Abgesang, will appear in 2006. As a literary translator, he edited and (co)translated editions and other major work by, among others, Elizabeth Bishop, Wallace Stevens, Char-les Simic, Dylan Thomas, and Derek Walcott. 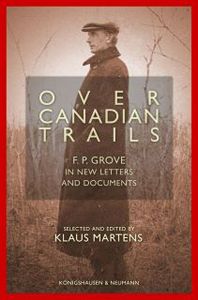 Of Frederick Philip Grove many things still need to be said or need saying again. In the years since his active role in the shaping of the Canadian literary institution much has changed. Canadian literature has developed enormously; it has recovered equally from traumas of colonial and post-colonial heritage to develop a firm identity of its own. Now the time has come to reassess some of what has been both said and left unsaid about Grove, but also about Canadian literature. Often pushed aside in more recent compilations of Canadian literary history, Frederick Philip Grove, as the first Canadian writer of intercultural significance, needs now to be introduced to a new audience as an intriguing avant-garde author in his own right, but also as a figure central to the inception of modern Canadian literature after the Great War.
In support of this claim, the book presents many previously unpublished or untranslated letters and notes by Grove and his most important Canadian and European correspondents. In addition, a wealth of other papers, contemporaneous documentation, and many photos and other illustrations cast new light on his career and life and provide as fully rounded a picture of the author and man as possible. This is supplemented by passages from work by Grove and some of his contemporaries, writers and critics alike, framed and intersected by the editor’s commentaries, summaries and analyses.
The book tells three interlocking stories: First, the story of Grove’s personal struggles and accomplished literary past in Europe. Second, the odyssey of the teacher through the small towns and the lonely villages of pioneer Manitoba and his human struggles as a Canadian writer and family man. Third, the story of Canada’s literary and cultural development in the 1920s to 1940s told, for the first time, in the form of lively epistolary exchanges between the principals involved. An epilogue includes a short evaluation of Grove’s place in Canadian letters and a review of recent criticism.